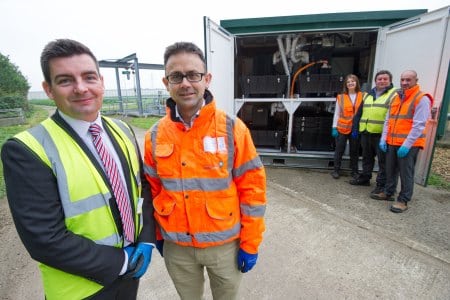 The energy storage systems use ‘second-life’ batteries from electric vehicles to collect and store energy. The stored electricity is then used to power the site at times when demand is highest, taking pressure off the electricity grid as well as saving money.

Much of the site’s power needs are already met using renewable energy. Its giant Combined Heat and Power (CHP) engines, run on gases produced by the sewage treatment process providing huge efficiency savings in both cost and carbon footprint.

The batteries themselves are British designed and developed.  The E-STOR technology uses second life Renault electric vehicle batteries to provide a smarter, affordable and more flexible approach to grid load management.  Sophisticated operating software allows users to maximise efficiencies and savings by storing excess energy for when it is needed most such as times of peak demand or when energy tariffs are high.

Matt Pluke, Anglian Water’s Energy Manager, sees this trial as a significant step in the company’s drive to become even more efficient – and carbon neutral.

Matt said: “Energy, in the form of grid electricity, is an important part of Anglian Water’s cost and carbon footprint. And it’s not just about how much energy we use, but also about when we use it. By using the batteries in this way we put less strain on the National Grid at peak times, and also save money by avoiding high energy tariffs.

“This kind of technology is a great example of how we can reuse items as part of a wider circular economy. Reducing the amount of grid energy we use by maximising our use of renewables as well as embracing new technologies is good for the business and great for the environment too.

He added: “This is the start of an exciting journey for battery storage in Anglian Water. This trial will provide the detailed data we need to prepare for a wider roll out across the region. We want to make the most of storing energy generated from our renewable sources, like the solar panels we are installing across our region. Integrating batteries into these projects could make them bigger, it would ensure more of the renewable power is used on site and would also give additional security of supply.”

Last year across the company, some 98 million kWhs were produced from CHP “poo-power” alone, with a further 15 million kWhs produced from wind and solar power.  That’s enough power in total to supply all the homes in Cambridge for eight months. By 2020 the company plans to invest millions on producing even more renewable energy.

Jason Cox from Connected Energy Limited who has developed the E-STOR energy storage technology, said: “The energy landscape in the UK has shifted. The debate isn’t just about how much energy we use, it’s also about when we use it. Anglian Water and Connected Energy have worked together on this energy storage trial to help maximise the potential of renewable energy projects and offer grid services support for the future.”

Matt said: “Projects like this and reducing our reliance on traditional energy sources is definitely something we believe a 21stCentury water company should be doing. It’s something our customers told us they want to see more of and it’s also helping us to keep bills broadly flat until the end of the decade.”

If you have a solution for Anglian Water, submit your solution using the Submission Process

5 Reasons Why Open Innovation is Relevant to You

What is the Innovation Shop Window?